You are in: Home » Magazine Archive » Number 02 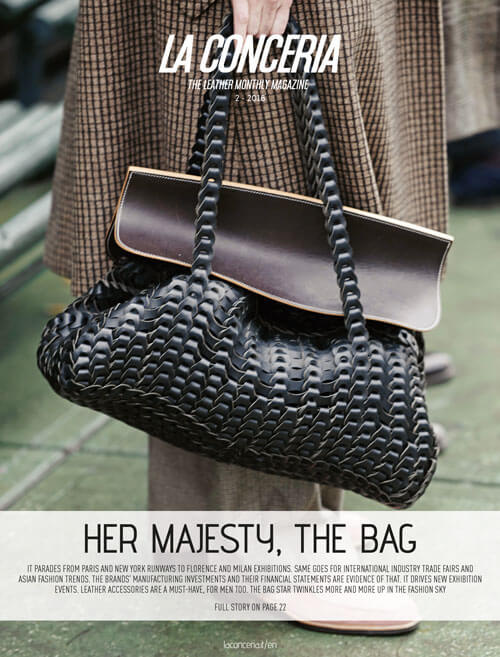 COVER STORY
HER MAJESTY, THE BAG
Export make a jump, Italy doesn’t
Handbag’s fever. The Italian leather goods segment gloats after a double digit 2017. More confidence from Mipel for international markets, and concerns for the slowing down of the domestic one.
Stars in Florence
Leather anointed as material of excellence. Leather goods become a must even in men’s fashion. The footwear segment trying to go beyond sneakers. Our report of Pitti Immagine Uomo 93. Men and bags: by now it is fashionable.
If it’s small it’s Asian
Far East’s consumers are instrumental for the luxury industry, and push for handbags, made with high quality leather and bright colors. Maximum size for the handbag: “Enough to make an iPhone fit…”.
Paris, Texas
Leather goods fly, Vuitton increases factories. The opening of the 15th factory for the French colossus and the first in Texas is a matter of months now.
The Fashion Week Men’s: London, Milan, Paris, New York
The leather on the Fashion Week Men’s: genderless and streetwear, contemporary and streetstyle, bags and bags. Photogallery.

AND THE SHOES…
Moving on
At Fieramilano Rho, MIcam (on February 11-14), “the only fair in the world dedicated to footwear exclusively” confirms that Russians are back (“We are waiting for actual orders though”). Classic trend goes down, “innovation on top”.
Leather says: out of the way
Expo Riva Schuh reshuffles cards for the medium segment: exhibitors are reducing the offer of alternative materials, while buyers are appreciating it. Moscow stand up, Beijing looks after herself, India open-ended. Gardabags: “To fill a hole in the tradeshow”.

SUMMARY
RENDEZVOUS IN MILAN
Summertime
Scheduled on February 20-22, at Fieramilano Rho, Lineapelle94 is ready to kick off, looking at Summer 2019 and thinking over the business trend reinforcement, which is currently underway. “Still being positively cautious” prior to opening. Exhibitors and space areas increase.

MACHINERIES
Peace of mind 4.0
The technology industry fair (for tanning, footwear, leather goods) is due to start in Milan (on February 20-22), along with Lineapelle. Spaces are sold out and the Italian machinery business keeps going up (since 2016). Simac Tanning Tech: sold out. Liaising with UNIC, for safety.

FAKE NEWS
Watch out for hoaxes
Italian leather is under attack from fake news. A substantial amount of news discredits the tanning industry and disorients the public. Even Corriere (main Italian newspaper) TV is part of the game.
A vaccine against lies
Fake news is attacking the tanning industry like a disease. Here is a remedy for avoiding infection.

CHEMICALS
Planning in the dark
Starting june 1st, the range of chemicals at the disposal of the tanning industry will change. Many products will disappear from the market, formulas will be re-written, and so will the scrip pads. The REACh.

ICEC’S YEAR
In the name of quality
The institute for the certification of the leather sector collects the results from 2017 and plans the coming growth, among market needs and over-populated competition.

FUR UNDER ATTACK
70% uses it
After Gucci, Michael Kors and Jimmy Choo accept to leave fur behind: “The esthetic doesn’t need it”. But FICA (american) disagrees: “Better than any synthetic alternative”. IFF against polluting synthetic materials similar to fur.

LANDING IN TUSCANY
The deed is done
Gruppo Mastrotto enters the district and plans a tannery in Santa Croce sull’Arno. Bought the shares to confer the refluxes to the depurator, 40/50 hirings are planned.

HAPPY BIRTHDAY
Sciarada’s 40th birthday
A monument with the S shape, the attention for the environment and the social impact, the business vision: the Tuscan tannery ends the celebrations for its 4oth anniversary and is “looking at the future”.

TALKING ABOUT FOOTWEAR
Indeed they do come back
“Production is getting closer to consumer markets”. The reshoring process is real. João Maia, director of APICCAPS, explains it during the opening talk of Expo Riva. Speed: the winning element.

ROAD TO PORTO-UITIC
95 abstracts
The organizers of UITIC 20th conference, the international footwear technicians meeting, are collecting the abstracts carried out by several researchers coming from 19 countries worldwide, 6 more compared to 2016: “A great success”.

DUTIES AND SHOES
It won’t work like this
Brazil leads the Mercosur coalition in duties talks with the EU. But in the reciprocal duties’ proposal it only includes rubber footwear. CEC is readily active: “They must change the proposal right away and include leather shoes as well”.