You are in: Home » Magazine Archive » Number 07 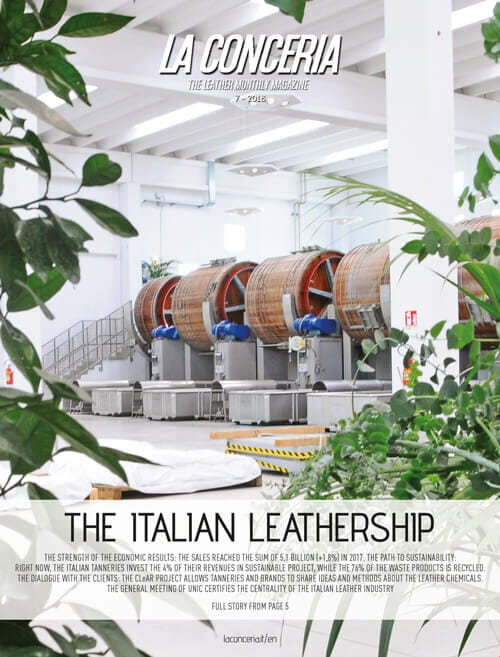 SUMMARY
THE NEW PRESIDENT
Leather’s truth
To answer the hit on shot to those who denigrate leather and use its name incorrectly. From the fake news to the “often unreasonable tests” requested by customers. The projects and the objectives written in the roadmap 2018/2020 of Cotance are many and excited. The new President Andreas Kindermann (Wollsdorf Leather) explains them in this interview

THE INTERVIEW
Kampur’s fear
Imagine that a government decides, for pretext reasons, to force a tanning district to close down for three months, and consequently putting a 2 billion (Euros) industry at risk. This is the situation developing in Uttar Pradesh. We discuss this matter with Taj Alam, President of the local Leather Association

SHOE PRODUCTION
España brand
We make “middle to mid-high quality products at a competitive price”, tell us Spanish footwear manufacturers. And in the last 12 consecutive months “our export has grown”. 2016’s crisis could be (almost) behind
Portugal’s courage
To celebrate the 20th edition of UITIC (International Technical Footwear Congress), we look into the Portuguese footwear chain, which shows the success of those that took advantage of the quality-price rapport, and the people that were able to change and innovate
The Portuguese path
The journey inside the Portuguese footwear industry is one inside a success story. One that doesn’t create its future simply by competing on price, but rather one that laid down the gauntlet on innovation and quality
More contractors for all
In 2017, Italian exports of footwear products grew 3.4% thanks (for the most part) to European markets that account for 7 shoes out of 10. 60% to 70% of businesses works as third-party manufacturers

FAIRS
The ring-around-the-rosie
At Pitti Immagine Uomo everything circles around the sneaker. While brands catch each others on the catwalks but not only, twisting the calendars of shows and revolutioning the sense of fashion weeks
Learning by sneakering
Even not doing them. Pitti Immagine Uomo confirms the predomination of the fashion sneaker. But a new trend is emerging: that of those who, «to distinguish from the mass», decides not to produce it
A repeating history
At Expo Riva Schuh stands (16/19 June) there are no news regarding product: for men or women, even in summer, the sneaker is dominant. But who is looking for alternatives (and a qualitative upgrading) can’t help but choosing leather

LUXURY
How to tell
Luxury discovering a new language. Condé Nast International, in Lisbon, made it the topic of its annual conference. Meanwhile a certain boutique of Gucci in NY made obsolete also the concept of storytelling
Experience and freedom
In Lisbon there is a talk over codes and languages of the high range. And we discover that, between by now consolidated perspectives (from digital to Millennials), the only thing that matters is (almost) trivial

ASSOMAC 2017
Machines don’t stop
Italian technology in the leather segment continues to grow (+10%), which confirms the country’s leadership around the world, but “it feels itself slowing down after 5 years of continuous development”

INNOVATION
Leather 4.0 for the 4-wheels
Intelligent and suitable for high-tech. High added value and attention to the medium segment. Efficient and sustainable. From the automotive interiors expo of Stuttgart the guidelines for tanning

ACCESSORIES AND COMPONENTS
Invisible and winning
SME to the test of the stock market. Forestali, while celebrating its first 100 years of activity, becomes ICF Group, entries the aim list in Milan and opens the doors to new development and growth shapes

OPENING OF CONFINDUSTRIA MODA
Teamwork make federation
Cutting of the ribbon, in Milan, for the general headquarter of the team that gathers together the Italian chain of fashion and luxury. A 94 billion Euro colossus is officially born