You are in: Home » Magazine Archive » Number 11 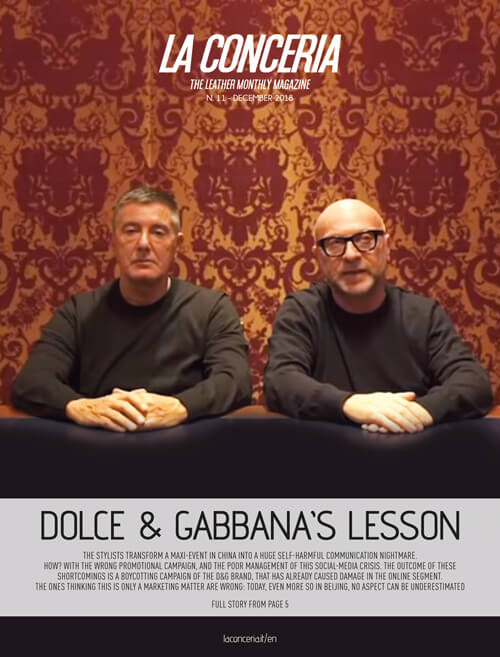 COVER STORY | DOLCE & GABBANA’S LESSON
Cards on the tables
Jack Ma is a member of the Communist Party in China. The revelation created doubts on certain mechanism of china’s economy: starting with the effectiveness of the boycotting campaign against D&G
What Beijing is teaching us
Can an erroneous advertising campaign ruin the reputation of a brand and compromise its position on a key market? Yes, it can
Appetite for luxury
Do not mess around with Beijing. While the world looks at D&G’s slup-up, Sitoy Holding bought the bolognese shoes by a.testoni and Fosun has attempted to do the same with Twin Set. In the meanwhile, Shandong Ruy dreams of becoming LVMH
Derby of quality
The bigs of luxury are divided between those emphasising the value of communication and those the one of product: different visions that give different roles to the supply chain
Fleeting summer
Bain & Co. and Ernst & Young agree: the luxury industry is in a positive season and years of growth await it. But, there is little to be happy about. Winter is just around the corner

ONE YEAR, 12 NUMBERS
The numbers for 2018, 2018 in numbers
12 key moments of the year that is coming to an end, after have by its story told by 12 key numbers of La Conceria. From raw material to finished products, here is the 2018 of the leather industry.

BORDERLINE
Innovation and law
The startup Italic aims at putting consumers in a direct connection with brands suppliers: “so that we offer the real democratic luxury”. But many hidden dangers were found in the project

MODEST FASHION
Not to be underestimated
Millenials, Generation z, Chinese: everyone is wearing to define who will be the future of the luxury market. A WGSN research identifies a huge and growing public: Muslims

THE MARKET OF THE FUTURE?
“Modest” to a certain extent
The “fashion that respects the precepts of Islamic religion” today is worth 238.4 billion euros. And it will go up to 318,8 by 2023. Too much to (still) consider it an ephimeral phenomenon

THE SNEAKER’S BOUNDARY
It will be like jeans
The meaning of the sneaker in the words of who (in 2017) produced 500,000 of them, growing by 41%: “In the wardrobe there will always be a permanent and important place”, say from Premiata

LEAVING BRUXELLES
Brexit and representation
A cult stylist launches a petition against London’s exit from the EU. But the move hides a deeper sufferance

INTERVIEW WRITTEN ON 05-12-2018
Risky Brexit
The political battle on the United Kingdom leaving the European Union gets to the tanneries, when Theresa May, looking for consensus, visits a Scottish Leather Group. We discuss this with Jonathan Muirhead

RAW HIDES
The Chamber is open
The Arbitration Institute celebrates its first assembly in Milan, renews the appointees and defines its roadmap. The objective: to make its activity more actual and open its doors to international synergies

CULTURE
Mecenati of the 21st Century
What we wanted to happen did happen: the Lineapelle/Unic -Concerie Italiane restoration project on the ancient tannery found in Pompei was awarded in Brussels

TANNERY
The “next level”
The tannery group from Veneto is starting a productive department to “include permanently and continuously in the company disabled people”.
A project based on the idea that “inclusion means integration”

SUSTAINABLE MANUFACTURING
The right choice
Tanning is an energy-eating type of manufacturing. Conceria Gaiera answers the need by investing in a photovoltaic system and, just a year after its instalment, states how the system, considering a few aspects, allows them to save money

RAW MATERIAL
Brazilian records
The meat supply chain of the large South American producer grows: the October results for the industry and the quarterly notes of big producers confirm it