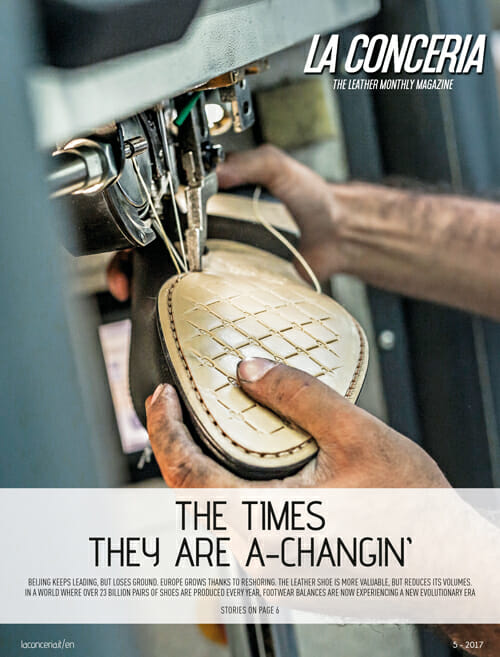 COVER STORY
THE TIMES THEY ARE A-CHANGIN’
Everything is changing, even though, as far as appearances go, nothing is different. The situation revealed, with both text and numbers, by the World Footwear Yearbook (done by Portuguese APICCAPS, Portuguese Footwear, Components, Leather Goods Manufacturer’s Association), can be defined as a “transitory phase”. The cover story of this issue extracted some of the data from the report. Chinese dominance remains untouched, but the country reports significant losses, on both production and presence on international markets.

SUMMARY
5,6% MORE VISITORS
What a Micam!
The footwear exhibition satisfies. Even though nobody speaks of economic recovery, the market is now breathing more easily.
Yes, we smile
Even non-Italian exhibitors smile at theMicam. “The market is recovering”, they say, but all eyes are open: “Too much instability, everywhere”. British satisfied as well.

GERMAN FAIRS
A good start
Once upon a time, there was GDS. The show that went to substitute the latter, Gallery Shoes, in Düsseldorf from august 27th to the 29th, satisfied everybody. More shoes, mostly online.

FROM MOSCOW TO BERLIN
Light and darkness
Two exhibitions: one in Moscow, one in Germany. CPM in Moscow doesn’t fulfill the expectations of Italian exhibitors, that had grown in number. While in Offenbach ILM satisfies them, but the fair is at its capacity limits (for number of exhibitors). 40 for 30 (thousand) at Bread&BUtter by Zalando.

47,187 SMILES
Handbags going strong
2017 has been so far, somewhat of a magic year for Italian leathergoods. Which suffers in the domestic market, but is strong with regards to exports. The crises might really be over.

THE NEXT CHALLENGE
The wait for confirmation
Lineapelle93 will be held from October 4th to 6th, and will close the sequence of Milan-based trade-fairs (happy with the renewed enthusiasm for finished goods) and introduces itself with a growing number of exhibitors, and a more international profile.

JBS CRISIS
Chronology of a disaster
Brazilian justice is closing-in on the Batista brothers. This is a quick summarization of how, in just a few months, the largest group in the meat industry got into trouble.

ACTIVE AUTOMOTIVE
American operations
Lear opens in Michigan to furnish GM, while Adient makes the opposite choice and closes in Auburn Hills. But, makes Futuris an acquisition.

HAPPY BIRTHDAY
Appointment for 2067
Vicenza’s based tannery Montebello celebrates 50 years of activity by projecting itself into the future, that even more than today, “will need to be based on the value of ideas”. And imagining future possible collections.

AND WE CHANGED
Where were we?
China grows more than expected by the government. It isn’t an economic boom, yet, it promises stability, in contrast to the past. China’s economy is changing, and the results are clear.
Undergoing transformation
Less export, more production to satisfy internal demand. Chinese leather changes recipient: a path that shows the advantages, but has costs attached to it.

FROM TANNERIES TO RETAIL
Russian autarchy
“What sanctions, we have it all!” Footwear production in Russia grows and the government activates investments to help the supply chain for the leather industry.

NEWS FROM TOKYO
10 more years
The EU and Japan agree on the terms for the JEFTA, free trade agreement. But for the leather industry that isn’t great. Quotas disappear, but duties remain for 10 more years. The Agreement Puzzle.

RESEARCH AND AROUND   |   by Lineapelle / Environment and Sustainability
A sonar for leather   |   Chemical products, watch out for CLP   |    Pinwheel or electronic? That is the problem